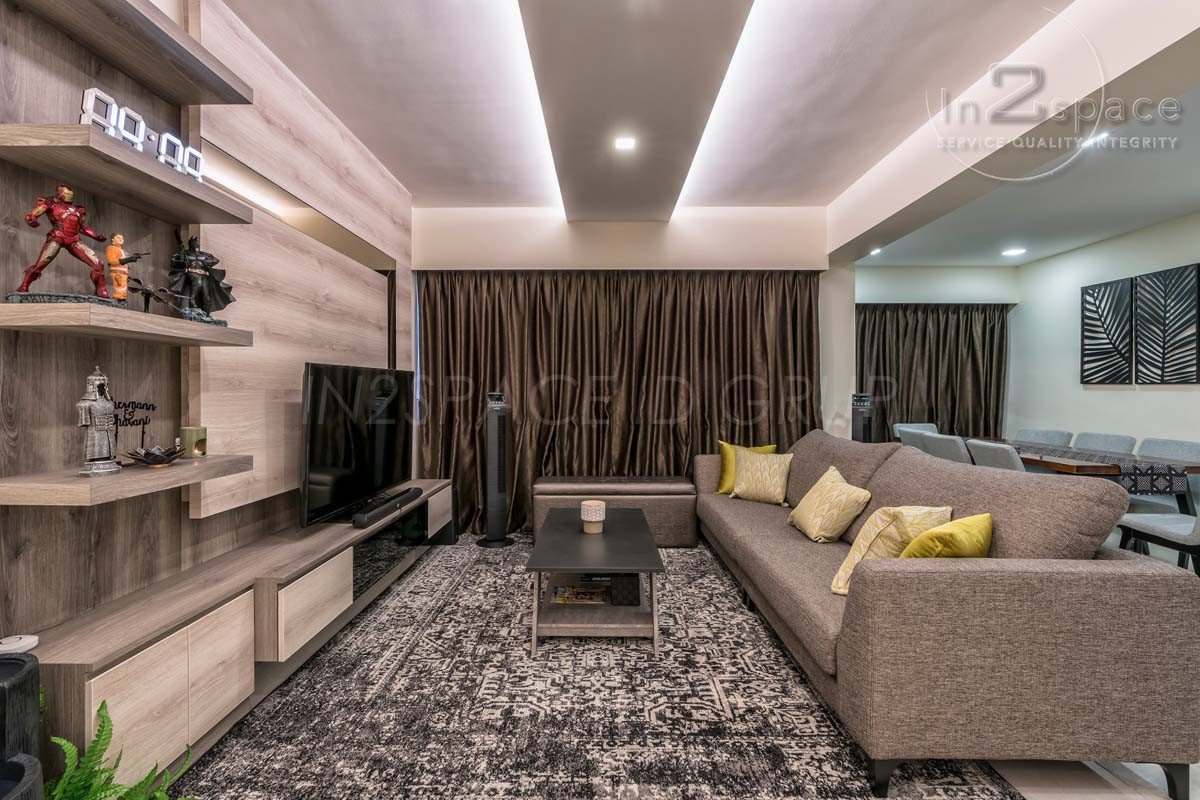 Possibly the worst place you can go to for an ID. Perhaps the experience is dependent on the ID you got, but due to sheer bad luck we settled down with a mid-age boomer dude named Sun*y. Pre-payment services with all smiles and empty promises, post-payment (after several payments were made), the attitude and service was just disgusting to say the least. First of all, the process at the beginning right after a deposit was made should’ve alarmed us. IDs are supposed to do a 3D composition, we had to chase repeatedly for the illustration and when finally we were shown the designs? One of the plainest shit we have ever seen, it can totally be done by any tom dick harry with basic knowledge of photoshop if I’m being honest. But whatever, it’s not the actual deal yet right? Fine we will bear with it. Workmanship - one of the worst I’ve seen in the industry. I have friends who are IDs (honestly should’ve engaged them instead if they had any bandwidth), and during housewarming thanks to their sharp eyes, we saw details that shouldn’t have been an issue. Such as simple carpentry edges that were damaged, scratched tiles, built in carpentry where the mechanical design didn't even fit (i.e. placements not aligned, scratches etc) choosing outdated toilet doors (without consulting us or giving us any say in design/type of door), inaccurate selection of colours (that we chose but he apparently didn’t give a f about our opinions) when questioned, he thinks a simple “sorry/ps” will cut it for his irresponsible attitude geez. Mind you, given his age and "experience", we would automatically assume a higher degree of professionalism in his work and attitude but it’s the complete opposite. And given the number of damaged goods handed to us, we would expect a complete change of items, after all we paid to have our house *newly* renovated right? I think at one point we were too kind to even accept his 'ps/sorry etc.' should've asked for a complete replacements of the damaged items! Also, an ID’s job is to always be in contact with the house owner right? To inform you of relevant updates, progress and most importantly to be at the site as often as possible to monitor the work done by his sub-contractors and rectify any mistakes seen on the spot (could have save everyone's time and money tbh). Well in this case, it's again the complete opposite! We were always the ones reaching out, checking on progress, rushing for certain things to be done. & since we were often at the reno-site as well, we can confirm he was 'almost' always MIA. There were also times where this unprofessional dude would simply hang up on us when we called him to clarify on certain things, as if he was harassed lol what a joke. NOT EVEN minimal customer service was rendered. How awesome! Anyway it took me a long time to contemplate whether to make this review, but after the most recent horrifying rude encounter, I’ve decided this sort of business does not deserve any form of graciousness. And future customers should be warned. Of course 1 black sheep’s shouldn’t have to represent the entire ID firm, but engage at your own risk people!
Project Coordinator(s): Sun*y Read more
Awesome Useful 1

Special thanks to our ID Cheryl, for helping us to create our first BTO to become our dream home. She is the most detailed, patient and collaborative interior designer we have come across.
Project Coordinator(s): Cheryl
Awesome Useful

Great service by Niklas. He is reliable and patient, provides good advice and delivers most of the things nicely.
Project Coordinator(s): Niklas
Awesome Useful

A job was well done by Noemi Cruz of In2Space. She had provided an excellent service from the conceptualization of the design to the renovation itself and even after moving in. During the renovation, she ensured that all the details were looked into by providing regular site visit and close coordination with all the contractors. Every single change was properly relayed to us through frequent calls and exchange of WhatsApp messages. She’s extremely receptive to feedback, all additional and last minute changes and requests were accommodated in full satisfaction. She’s a very meticulous person, which is considered an asset of a good designer. In fact, before we see any defect, she already asked the contractor to fix it. She even took time out to accompany us shopping for lights, curtains, and wallpaper. After the renovation completion, she remained responsive. She attended immediately to the minor defect which was overlooked during the turn-over.
Project Coordinator(s): Noemi Cruz Read more
Awesome Useful

I would like to Thanks Sabrina from In2space for her experience and effort in renovating my home. She knows that I just move back from overseas and needed my house urgently, She makes it real fast for my kitchen cabinet, kitchen door and my bedroom wardrobe. Everything was done nicely and my wife really likes the kitchen door and the carpentry works from her carpenter. Good workmanship! She uses her experience to let us know where and what needs to change and how to save space.
Project Coordinator(s): Sabrina Read more
Awesome Useful

I am thankful to Sammy who is my ID for her meticulous work in ensuring that the entire renovation process is completed smoothly. There were a couple of hiccups with the kitchen, but she was still very patient in explaining the issues to me. Sammy was detailed and responsive in updating me on the progress and rectifications that needed to be done. She was also very helpful in providing advice with regards to the colour scheme of the house, materials used etc., all the while bearing my budget in mind. Best of all, what I liked about her service was her honesty and helpfulness even after the completion of the renovations.
Project Coordinator(s): Sammy Read more
Awesome Useful

Sammy from in2space did propose a no-frills package just what I needed bearing in mind we are young first-time owners on a budget. The process was smooth and when we were not able to be on site when required, Niklas always came by on behalf and went with pictures and videos to ensure it is what we wanted. Also, as we tend to be fickle-minded in our choices, Niklas and Sammy were more than willing to accommodate last minute changes.
Project Coordinator(s): Niklas and Sammy Read more
Awesome Useful

I am happy and satisfied to have selected In2Space to do my home renovation. Reasonable pricing and good workmanship! Special thanks to my ID, Cheryl, who has been very helpful and responsive. She had given me good and practical advice in selecting the right furniture and fittings. Even in the layout of the custom made furniture, she had my interest at heart and help me to design one which suits my needs even before I encounter them.
Project Coordinator(s): Cheryl Read more
Awesome Useful

I would like to thank Marcus for his sincere time and effort in drafting out our ID plans and doing up some sketches for our house. He is one of the most detailed, patient and collaborative interior designer we have come across.
Project Coordinator(s): Marcus
Awesome Useful

Thank you to Sabrina for bringing our dream home to fruition. After only 2 discussion sessions, she was able to capture the cosiness and warmth that we were after in the illustration. Despite some hiccups with the timeline (which Sabrina has sincerely apologised for), the completed house looked exactly like the illustration and had every detail that we wanted. The project costs were also outlined very clearly from the beginning so that there were no sudden, hidden extra surcharges.
Project Coordinator(s): Sabrina Read more
Awesome Useful

IN2SPACE is a full-service interior design & renovation company based in Singapore, founded and led by an experienced veteran who has over 20 years of experience in the interior design and renovation industry. Our mission is to provide distinctive, customized interior while remaining sensitivity to the client's budget and time constraints. We practice transparency in our pricing, through thorough explanations and advises. Going the extra mile is always a common practice in our culture. With space constraints as a common challenge in the local residential renovation. We emphasized on space optimization to maximize the potential usage of space in any given project, working very closely with our clients from concept to completion to create effective solutions for every individual need. Other than being service orientated, the company also upholds "QUALITY" and "INTEGRITY" - which alongside with the topmost priority of "SERVICE", forms the three mottoes of the company.

An email is sent to your email address containing a link to reset your password. You can check your inbox now.

You’re almost done! We sent an activation mail to